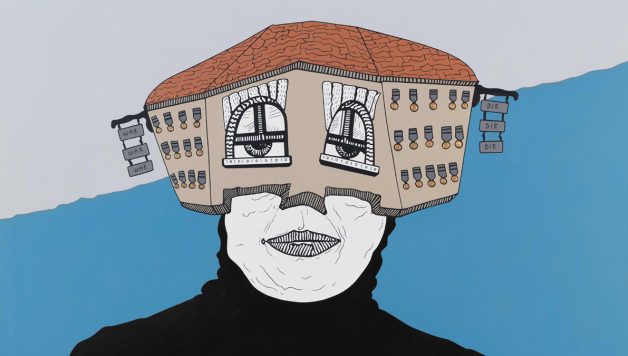 How do you / others describe your art?

I don’t limit my work to specific concepts and disciplines. I’m a multidisciplinary artist who frankly desires to share his feelings and ideas under several forms, so, while producing, I aim for the idea and medium to find their genuine way. I am fed of everyday life. Mainly, I paint. Paintings are in the center beside videos, installations, sculptures and performances.

And for the second part of the question, the curator Marcus Graf recently wrote about my work in these words:
„Buğra Erol’s oeuvre is characterized by a great balance between poetics and politics, as well as stories and histories. This is the main reason why he succeeds in creating relationships between the individual and the social in order to formulate a meaningful socio-political criticism that goes beyond didactics. At the same time, his pieces never lack aesthetical reflections or formal considerations, as he values their physical being. In this context, it is important to underline the nice equilibrium between form and concept. At the same time, as he does not limit himself to a single way of production, his oeuvre is in a permanent flux. Erol’s interest in experimenting with artistic strategies and methods, and his passion for playing with styles and methods gives his work an exceptional character. As he constantly questions and renews his artistic approach to aesthetics, techniques and media, his oeuvre is characterized by pluralism and eclecticism. He works in various disciplines like painting, drawing, as well as object, installation, video and street art. Conceptually, his pieces are dominated by existentialist questions regarding mankind’s right stand, role and engagement in the world.“

What people should know about your solo-show at BERLINARTPROJECTS?

The paintings featured in this show, called Mind Your Wishes, are mostly focused on feelings and memories, belonging to the last two years of my life. There were a lot of changes in my personal life, in my direct environment, changes of situation, changes of places, from Istanbul to the Island, from the Island to Berlin. They are part of the depicted subjects. It is a kind of journey into my mind accompanied with a fantasized reality. I’ve been drawing in my sketchbooks on a very regular basis to capture these feelings and they were transformed into meticulous paintings on canvases in Berlin. It is actually a long process project.

Who should come by?

Everybody of course. I would not decide on audience’s profile.
Because everyone looks at an artwork with his/her own background so everybody has different things to feel, to see… When someone looks at a painting, I think it’s
no longer about artist’s story behind but it is about what this specific artwork makes you feel or see. This is why, I prefer to keep my stories to myself and leave to the audience a space to freely establish a contact with the artworks. This may later permit us to exchange our own stories.

What is your motor?

Everything. Why should I limit myself?

When/ where/ what will you exhibit next time?

You can see my artworks until the 8th of July in Berlin at BERLINARTPROJECTS. You can find the opening hours on their website: http://berlinartprojects.com/en/
My next solo show in Europe will be at the gallery Art Affairs in Amsterdam. Meanwhile there will be some other group shows and projects in Berlin and Istanbul – but they are not confirmed yet.

I wouldn’t add anything about the artworks of this particular show but I invite you to go and see them and continue the observation.
What I did before on Greenpeace, or my older works related to environmental activism seem to arouse curiosity very often. I used to work as a Greenpeace activist all around the world for more than 7 years. In my previous exhibition, called Good Luck, we can clearly see the intersection of two sets: Buğra as an artist, and Buğra as an activist. I received an archive of old slides (dias) from Greenpeace London, and I made four lightboxes with them, using a collage technique. So, yes, my artworks are also made of my personal commitments.