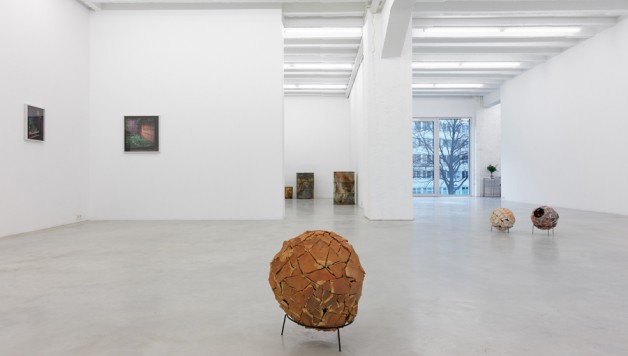 Galerija Gregor Podnar Berlin is delighted to announce Ariel Schlesinger’s new exhibition Okazaki. Schlesinger’s third exhibition at Galerija Gregor Podnar, Berlin takes its name from a small city in Aichi prefecture, Japan, where the works for this show were conceived. Referring neither to a battle cry nor a suicide attempt, the name seeks to evoke a far off place, where actions seem to have already taken place. As in a Dantesque reversal of his former potentially „explosive“ presentations, Schlesinger will show selections from the series „The Kid“ and „Inside-out Urns“, as well as new works.

„The Kid“ is inspired by Charlie Chaplin’s silent ﬁlm of the same name. Photographs of fractured windows are framed with broken glass which replicates the fractures in the photos. No longer a destructive action, this mise-en-abyme becomes rather a removal, a change of perspective, a reference to the issue of duality often examined by Schlesinger, and also a game of duplicity, where the subject of the work is integrated as a structural element into the form of the work itself. If the fragile and minatory aspect of these works seem to be predominately of the order of cinematic ﬁction, „Inside-out Urns“ would seem to offer a safer, even more reassuring approach: these consist of shattered urns which have been carefully reconstructed and restored to their original form, only with inner surface turned outwards. Not a ruin, but a feeling of risk being thwarted. At least for now.

Born in Jerusalem in 1980, Ariel Schlesinger lives and works in Berlin. He attended the Columbia University, New York, the Bezalel Academy of Art and Design, Jerusalem. For more information, please write to berlin@gregorpodnar.com.