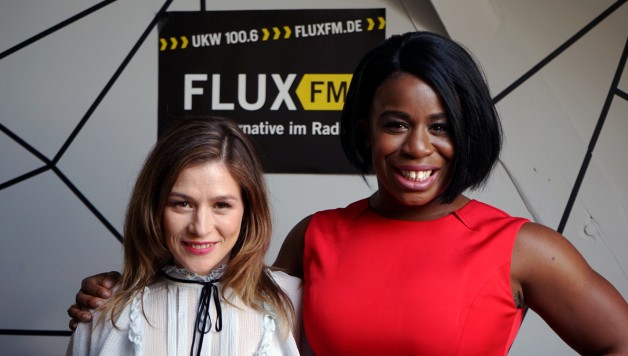 Nadine Kreutzer: Welcome to FluxFM. You look wonderful, you dressed up, like going to the Academy Awards.

Nadine Kreutzer: Traveling around like rock stars, how is it to be a part of Orange Is The New Black?

Nadine Kreutzer: Do you put on your working clothes and then have a great day – or is it also really hard work from early in the morning until late at night?

Uzo Aduba: It’s definitely hard work, we go in with the mindset of doing the work first. Everybody in the cast takes the craft of acting very seriously – we go to work, we go there to work. But we also enjoy each other on the other side. So when we’re not shooting, we have a good time: Yael and I have been on vacation together…

Nadine Kreutzer: Oh, really? Where did you go to?

Yael Stone: We went to Hawaii, you know, we wore Bikinis, got in the sun.

Uzo Aduba: Yeah, we had a good time. What I mean to say is, we enjoy each other in that capacity that is like…

Yael Stone: When she says ‚We enjoy each other‘, she means she’s in love with me.

Nadine Kreutzer: Yael, you’re living two blocks away from where the series is filmed?

Yael Stone: I live close to where we shoot the show, which is great. We’re really lucky, because we’re shooting in New York – it’s a beautiful city to live and work in. The first time I visited New York, I found it very overwhelming, because there’s so much energy in that city and I thought to myself, the best way to be in New York is to be working. And to have that blessing of being in that amazing, creative, stimulating city – much like Berlin.

Nadine Kreutzer: You’re from Australia, Sydney. What did you tell Uzo about Australia or did you take her to your hometown, as well?

Yael Stone: She knows a lot about Australia already. She has family there.

Uzo Aduba: Yeah! One of my aunts immigrated to Australia and they never left. I actually got to Australia last year as well and it was fantastic.

Nadine Kreutzer: How important is Piper Kermans experience for the show? We heard that she has visited the set sometimes – does that help? Does she speak to you and says that’s very good and pretty accurate?

Uzo Aduba: I think Piper Kerman is a brilliant contributor to the show in that sense that she wrote the book on which the show is based and gave us our title! That was a great jumping-off point for Jenji Kohan and the other writers for telling the story. She serves mainly as a consultant on our show. But she has been wonderful in letting Jenji write the show and allowing the actors also to do our jobs as actors, to tell the story to the best of our ability.

Nadine Kreutzer: Before you go to an audition or a casting you probably don’t know exactly what’s coming out of that. Will they take me, how will it change my life? And now you’re standing here, couple of years later, and you’re stars – we have to say that! You, Uzo, you managed to become the first woman in TV history to win both comedy and drama Emmys. Is this a bit like a dream coming true or is it like, just a normal day?

Uzo Aduba: Definitely not a normal day! Definitely not, I can tell you that! It’s a dream, and it’s a dream because I genuinely love this job and I genuinely love working with the people I work with. So that day, in addition to feeling just overwhelmed because I know what the day was like when I got the job – I had quit working and I keep saying it all the time Jenji Kohan, she saved my life that day because she allowed for me to being able to continue doing what I and my cast mates love to do – and that’s the reward. And it’s just a dream.

Yael Stone: And that day, let me just say that all the people that Uzo works with were crying like babies! We just lost it! We stood up in that auditorium and we were cheering and screaming, we were sitting next to Uzo’s mum – a beautiful woman! I could not have been more proud of this woman. She is so generous and has always included us in this crazy journey that she’s been on and it’s a joy to work with somebody who you respect and love.

Nadine Kreutzer: Yeah, I believe that. So, Yael, you went to the audition on the day after your wedding? Were you so confident like „Oh well, I’m married to my dream person, I’m here now, nothing can happen to me – I’ll try this!“ Or you maybe had a hangover?

Yael Stone: It was an interesting time, because I had just left my career in Australia, and with no plan I had decided to come to New York and just try and see what happens. It was my fourth month and I was working for tips to pay my rent – working hard. I got married the day before and I had to dress up a little – so I bought one lipstick – it was the only lipstick I had, and that was the red lipstick that I wore to the audition. And that ended up being Lorna‘ s red lipstick.

Uzo Aduba: She is so known for that lipstick!

Nadine Kreutzer: Uzo, your role Suzanne is also known as „Crazy Eyes“. When you get this role and you know that your character will have the nickname „Crazy Eyes“ – do you stand in front of the mirror the day before and try to make crazy eyes?

Uzo Aduba: No, I stood in front of the mirror and wondered „What about me looked crazy enough?“ And I’m still trying fo figure out. I just tried to find something about her – a gesture or a slight tick, that makes her slightly different than the rest.

Nadine Kreutzer: We also have some questions from our listeners. Maria Aragon Bartsch asks: If you had to go to prison yourselves, which character would you get along best with?

Yael Stone: I think I would still be hanging out with Natasha Lyonne’s character Nicky Nichols. She is good people, she keeps you in line, she is fun, she tells the truth and she is tough. She’s going to be a strong allegiance.

Nadine Kreutzer: Are there certain musical styles or songs that you listen to on set?

Uzo Aduba: Actually, the ghetto dorm girls, that’s the black girl dorm, we sing a lot between takes. We’ll make up songs, we sing a lot of 90ies R’n’B.

Nadine Kreutzer: We have another question from Zoe on Twitter: “Uzo, is it true that you’re leaving OITNB, or is it just a rumor? You can’t leave, you’re the best!” Sorry, Yael…

Uzo Aduba: We have to wait and see what happens on June 17. I think you can feel excited to know that there’s new blood and old blood coming back to the season, and… you know, I think we see that Suzanne’s there…

Nadine Kreutzer: Is there an episode or scene that was particularly fun to shoot?

Uzo Aduba: The lake was amazing!

Yael Stone: I was busy getting married…

Uzo Aduba: Yeah, Morello was busy getting married when we were all at the lake. The lake was one of the most fun days. We shot in October, it was cold, and everybody could have had a bad attitude or been complaining about it, and everybody would have understood, ‚cause we’re asking you to be outside in a lake. Instead everybody was Team Orange and in a good spirit. People were diving into the water, who did not have to even get in: Crew, writers, producers – they did it just to be there with us and support. It was awesome, everybody just had so much fun.

Yael Stone: This always happens to me! I feel like I’m this guy, you know, you work on a show for four years and everyone’s like, “You should have been there! The lake was the best fun we’ve ever had!” Oh, that was the one day I wasn’t there… thanks guys.

Nadine Kreutzer: It was a pleasure talking to you, see you next time, enjoy the premiere! Thanks for coming to Berlin.